Yesterday we celebrated Father’s Day in music, interviews, stories and through Jesus’ encounter with the children of Palestine.  Our service was a beautiful kaleidoscope of earthly and heavenly fatherhood.


Which part of the service spoke to your heart in some way?  Recall what may have stood out as something important – a memory, a word from God especially to you, an emotion that came over you, a new thought.  All or any of these is your heavenly Father saying to you, “Let (your name) come to me.”  Spend some time in meditation and prayer with this.


Pastor Bruce spoke of the value of children as expressed in Jesus taking action towards the rejected children, the blessing upon children as Jesus spoke over them words of affirmation, and the reception of children as he took them up in his arms.  Which of these three aspects of your heavenly Father’s attitude towards you is particularly meaningful to you in these days?  How does it speak to you?  Does it call you to action in some way?  Does it help you understand your place in the Kingdom?  Does it bring insight to your soul?


Jesus sat down and called for the twelve disciples to come to him. Then he said, “Anyone who wants to be first must be the very last. They must be the servant of everyone.”


People were bringing little children to Jesus. They wanted him to place his hands on them to bless them. But the disciples told them to stop. When Jesus saw this, he was angry. He said to his disciples, “Let the little children come to me. Don’t keep them away. God’s kingdom belongs to children like these. What I’m about to tell you is true. Anyone who will not receive God’s kingdom like a little child will never enter it.” Then he took the children in his arms. He placed his hands on them to bless them.


Now, gaze upon this picture of Jesus blessing the child. Ask him if he would like to speak to you in some way. 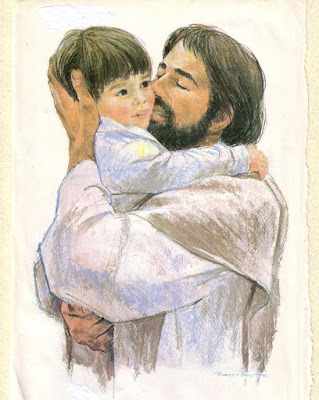